Home prices in Austin Texas are slowly falling, but the long-term prospects for this central Texas city continue to rise

Austin, Texas, fell from the No. 1 spot in 2021 to a predicted No. 10 in 2022 on Zillow's list of hottest housing markets in America. Tampa, Florida, has assumed the top spot, but Austin is still a very robust market.

The capital city of the Lone Star State has seen explosive population growth, the most of any large metro area in the United States from 2010-2020, according to the U.S. Census, swelling by a third in only 10 years to nearly 1 million in the city itself and about 2.3 million for the metro area. 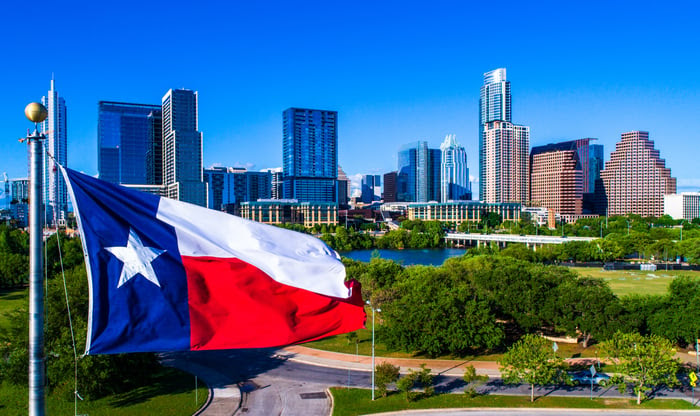 While the real estate market takes a much needed breather, a strong demand is expected to continue for Austin. Besides lifestyle factors -- Austin has long been the live music capital of the world and cultural magnet -- employment here is booming too.

Big business is a big reason for the explosive growth, of course. Dell Technologies was created here, and the list of such major players is now growing fast. That includes Tesla headquarters and a manufacturing plant, along with Elon Musk's Space X. Oracle also is moving its headquarters there. Apple, Meta Platforms, and Alphabet/Google have a major, growing presence here too. And just in November, Samsung announced plans to build a chip-making plant in nearby Taylor, Texas.

It's not only big, publicly traded companies, either. There's state and federal government and the University of Texas, plus a burgeoning community of digital start-ups and maturing fintechs that add to the heft. And the biggest private employers? Grocery chain H-E-B, with about 19,000 Austin-area employees leads the list and is the largest employer in the state, followed by healthcare system Ascension Seton and Walmart at about 15,000 each, Dell at 13,000, and Amazon at 11,000, with a massive new distribution center under construction that will add more to the area.

With tens of billions of dollars in new investment into real estate of all kinds, as well as tens of thousands of new jobs pouring into Central Texas where the population is predicted to double in the next couple of decades. That, too, will add to the demand for housing, of course. "We're already short on homes here, this recent slowdown is being touted by some as a major shift but this is only temporary" - Gary Dolch co-owner, Austin Luxury Group. "This is a homebuyer's dream- here's why."

1. It's still a relatively good deal

According to most of our relocating clients from areas such as the west coast and upper east coast, it's a bargain compared to where they're coming from according to Dolch.  The typical value of a home in the central Austin market itself rose a staggering 39.4% in 2021 to $612,645 according to ABoR stats. Meanwhile, Compass says that in December 2021, homes here sold for a median price of $570,000, up 19.5% from December 2021. Compare that to a typical value of $1.3 million that Zillow pegs for a home in San Jose, California, and you can see why thousands of highly paid existing and future employees of those big tech firms are making the move here to Austin.

2. A growing market can sustain a long-term investment

A surge of new business investment, as well as the population surge that's accompanying it, means an investment in a home here continues to be a good strategy for building long-term wealth. That part of the American dream continues to be achievable here, even with such escalating prices it's not too late to get in as we believe Austin home prices will continue to rise by 30%-40% over the coming 5 or 6 years.  The market itself is expanding, especially southwest and north of the city, providing opportunities for less expensive homes that could see significant value escalation in the years ahead. And inventory is growing at the moment, taking some pressure off price hikes overall, and those smaller cities outside the core market look especially attractive. In West Austin, where we see the highest concentration of wealth in Austin home prices have also fallen back around 10% but we saw a 25% increase in prices since Q1 2022 so the adjustment is still to the plus side for current homeowners

3. People want to live here for the lifestyle, too

Austin has a great reputation as a place to visit and really live. We have a legendary music scene that's still very much alive in the 6th Street District, our massive South by Southwest festival and conference, our Austin City Limits Festival (ACL FEST), and our brand new Moody Theater recently opened with a massive amount of incredible shows booked, such as Harry Styles who had "residency" in Austin with 6 sold out back to back shows here recently. We have one of the only Formula One Racetracks in the country (F-1) here and the many other attractions and stability of The University Of Texas and state capital, and the vibrancy that comes with being a powerful and growing, optimistic area. The median age of the Austin metro is 34.9 years, compared to 38.2 years nationally.

A great place to live and an investor's dream, especially if that's your home, too

Austin is a great place to live, our "keep Austin Weird" mentality and entrepreneurial spirit makes this a great place to invest in a home, too. Altogether, we are very optimistic here and for many a homebuyer's dreams come true here deep in the heart of Texas.